Thanks to Hypable, I just saw the opening sequence for Avatar: Legend of Korra!  It seems to have been leaked, so who knows how long it will be up, but omg, it looks good and I can’t wait to watch this miniseries sequel to Avatar: The Last Airbender whenever they decide to air it.  ( April 14 has been announced as the air date for episode one!).

Here’s a transcription of the voice-over, which is being narrated by Tenzin, who is Aang and Katara’s airbender son and who is going to have to teach the new Avatar Korra airbending. (I’m referring to stuff we learned from this year’s Comic-Con).

Earth.  Fire.  Air.  Water.  When I was a boy, my father, Avatar Aang, told me the story of how he and his friends heroically ended the 100-year war.  Avatar Aang and Firelord Zuko transformed the Fire Nation Colonies into the United Republic of Nations, a society where benders and non-benders from all over the world could live and thrive together in peace and harmony.  They named the capital of this great land Republic City.  Avatar Aang accomplished many remarkable things in his life, but sadly, his time in this world came to an end, and like the cycle of the seasons, the cycle of the Avatar began anew.

So who are the benders in this intro?  Are they all Avatars? The earthbender is dressed as a Kiyoshi warrior, so it’s possible she’s Avatar Kiyoshi herself.  The Firebender looks like Avatar Roku, although the quality of this video is not great and I can’t be sure whether his topknot is adorned with the Fire Nation jewelry that Sozin gave him.  The airbender could be Aang, and obviously the waterbender is Korra.  (**update** I now have screenshots from the proper, non-leaked opening sequence). 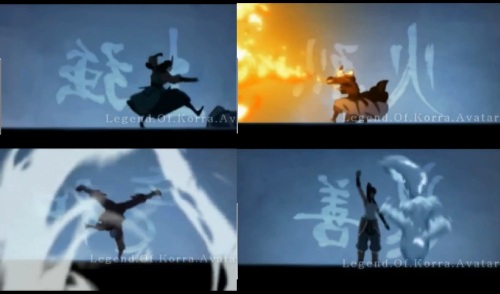 The writing is backwards in these screenshots. I know because I, um, might have painted the symbols from ATLA’s opening on a banner that I have hanging in my kitchen…

At first I thought it sounded like Zuko had pretty much taken over the world with the blessings of Avatar Aang, (I LOVE that they pronounce Aang the way we all love and remember it, and not the odious ‘Ong’ from the live-action disaster of a film, by the way), but after closer inspection it sounds like it’s just the colonies that were united into a new republic, and the pre-existing nations still exist.  Is that accurate?  It still kind of sounds like Zuko taking over the world, though, because all the colonies were outside of Fire Nation territory, i.e. taking over someone else’s territory.  Hmm.

I’m amused by this depiction of Katara from an image of the gAang shown while Tenzin remembers his father telling stories about their exploits: 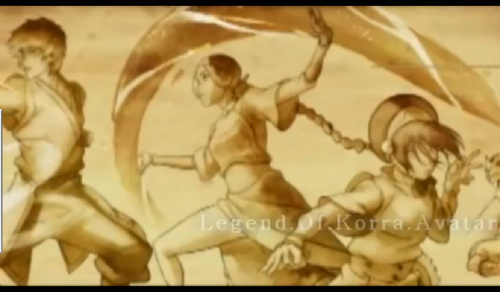 Is this not a way more sexualized Katara than was ever seen in the original series?  I mean, I guess she practiced in her underthings sometimes.  But here she’s showing a midriff and a thigh-high slit in her dress, which doesn’t resemble any outfits I remember seeing her in.  Everybody else looks just like they did in the original show.  Am I misremembering her?  I suppose it’s possible she’s wearing tights, and now that I am really analyzing this picture it does look like she has long sleeves as well, and now I’m remember she did show some midriff in her Fire Nation disguise for half of season 3.  Well, whatever then, but my initial reaction was to laugh because I thought maybe this sexier Katara version was how Aang described her when he told all these stories about their history.  You know, embellishment.

Also, because I’m a devoted Zutara shipper, I love the placement of the characters in this shot, like Katara is closer to Zuko than Aang.  *sigh* If only. 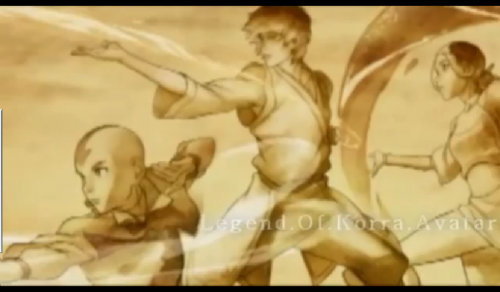 I am assuming this will not be the exact intro for each episode of Korra, just as the intro for Book One: Chapter 1 of The Last Airbender was different from all the other episodes, but I’m sure the part with the benders will be the same, and I guess Tenzin will probably narrate the other version too.  Maybe it will say something about Avatar Aang being his father, and “now I must teach airbending to the new Avatar” or something?

Oh, and it looks like the first episode will be titled “Welcome to Republic City,” and this season is being called “Book One: Air”, which will make it a nice companion to Books 1, 2, and 3 from ATLA which were titled Water, Earth, and Fire, but what will Korra’s Book Two be titled, if it gets one?

Anyway, who else is excited for this?!  I know I’m not the only one!

Tagged as avatar: the last airbender, legend of korra