So, we have our first trailer for the new Star Trek: Discovery series and I have thoughts!

Since we still know so little about these characters or the setting beyond generalities, it’s hard to get overly excited about footage that leaves so many unanswered questions and seems to be holding so much back. But there are a lot of things in this limited glimpse that make me eager to see more.

First of all, those navy blue uniforms are making me think of Battlestar Galactica; also the line “Great unifiers are few and far between, but they do come. Often such leaders will need a profound cause for their followers to rally around.” which totally describes Captain Adama leading his fleet of devastated human survivors in a rallying cry of hope that they will discover long-lost Earth, even though he knows it is a fable.  We don’t really know what the “great cause” will be in Star Trek: Discovery yet, (conflict with the Klingons? Something to do with that myterious object is that she goes out to explore “on the edge of Federation space”), I’m just saying…I will not be the least bit upset if it resembles Battlestar Galactica more than some of the cheesier Star Trek iterations.

Another note regarding the uniforms is the minimizing of distinguishing rank or branch by color typical of Star Trek, though there are stripes of gold and silver-blueish that may parallel Kirk’s gold top and Spock’s blue one. I haven’t spotted any red stripes, but maybe there are just no “red-shirts” featured in this trailer footage, or maybe the low-ranked crew members will wear a different color. The gold that Kirk wears isn’t consistent with the red that officers in command wear in later crews, and Discovery is set “10 years before Kirk”, so maybe the blue for science officers and yellow/gold for engineering won’t be distinctions here either; we’ll have to wait and see. But I do think the alien with silver/blue stripes that tells Michael his species can sense the coming of death might be a medical officer, right? Seems like that would be a handy career with that particular skill. (Also, um…that line was very cheesy, and I hope not indicative of the overall tone of the writing for this show). 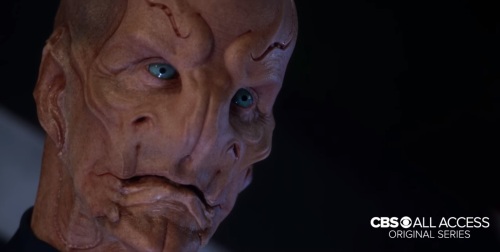 Things we now know about main character Commander Burnam: she has been serving in Starfleet for at least 7 years. She doesn’t like not having a clear direction or course of action to follow, (“We have no map, and you can’t set a course without a star!”). She has a close relationship with her current Captain, but also possibly a Vulcan mentor? She’s human, but she was definitely raised by Vulcans at some point—just look at that childhood flashback haircut. And much of her posture throughout the trailer looks very Spock-like. But in the flashback, she’s told by a character that I didn’t realize until I read other’s analysis is Spock’s father, Sarek, “You will never learn Vulcan. Your tongue is too human.” I would say that her passionate exhortation later in the trailer to “cut of it’s head” and “we have to” strike first are also too human to fit with a Vulcan logic-over-emotion code of conduct.  But, on the poster she is looking through a Vulcan hand salute, so clearly she embraces (or tries to embrace? Or feels it is her obligation to try to embrace?) Vulcanism. I’m super interested in seeing how this develops. 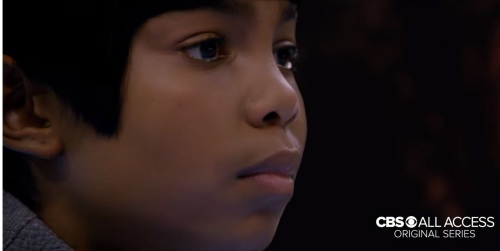 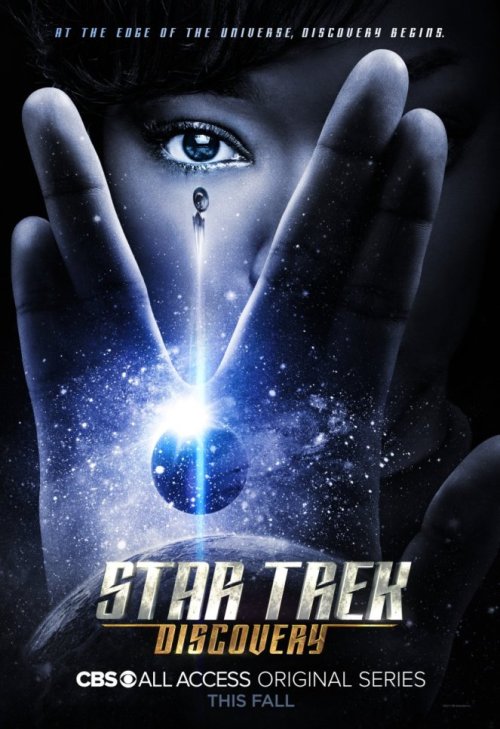 This trailer sadly has zero Jason Isaacs, announced as the Captain of the titular Discovery, but I guess that only means it will be that much more exciting when we finally do get to see him in this role. Like most human beings with a pulse, I dearly love any and all performances by Jason Isaacs, and tried to get a Captain-and-cadet posed picture when I met him at Kansas City’s PlanetCon last month. He said he was “not allowed to do Star Trek stuff yet” though, so this is what came out instead, but you know WHATEVER, I STILL GOT A PICTURE WITH JASON ISAACS! 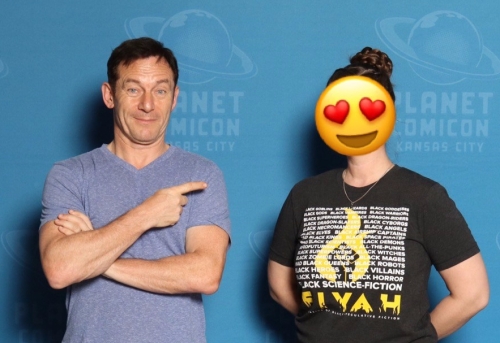 I’m guessing that his role might be adversarial to Burnham, in contrast to the close mentor-ship that the trailer seems to imply between Burnham and her current Captain Georgiou.  But if that’s the case I’m sure the erstwhile Lucious Malfoy can pull of a charismatic antagonist. Besdies, I’m sure all the relationship dynamics will evolve as the show goes on, anyway.

There’s nothing standout about the music in this trailer—the familiar theme doesn’t play until the end, and I wonder if they will even use that melody for the actual show or if it will have its own opening credits music.

My biggest fear for Star Trek: Discovery is that it might be mere action-adventure like the recent Star Trek reboot movies, rather than science fiction like that original series and films. Science fiction is more purposeful than just a story with spaceships or technology that hasn’t been mastered in reality yet; it’s about commenting on the present through a narrative set in the future. Sometimes it’s a warning about a future we should try to avoid, other times it’s a signpost we could follow to a future we’d like to live in. One of the great allures of Star Trek is imagining such a positive future for humanity, where unity and a high value of intellectualism has enabled the achievement of so many advanced technologies, and where racial and gender-based inequalities and prejudices aren’t dominating the culture so strongly and violently as they do today.  The fact that the lead character in Discovery is a black woman is incredibly important, and hopefully there will finally be affirmative lgbtq representation too. I wish it wasn’t the case that there are already some people complaining about the diversity of this cast, but that ugly part of our present reality is part of the reason why we need this futuristic story to be told this way, right now.

Imagine being upset that a show that features Vulcans, Klingons and Ferengi, also has Black and Asian people. https://t.co/X8FHPa4hL8

Anyway, overall I am looking forward to watching this show and preemptively assuming I’ll stick with it even if it is cheesy, underwhelming, or problematic, because Star Trek. I’m toying with the idea of doing episodic recaps, just because I’ve always wanted to test my skill at that and my courseload for next fall is fairly light, so why not assign myself more writing to fill my free time? If you’re familiar with my blog you know my previous recaps have tended to be on the snarky side but that may have been mainly because the subject matter was so…snarkable. It remains to be seen whether or not Star Trek: Discovery will earn itself a more earnest approach. But I am looking forward to it either way!