Hillary Rodham Clinton delivered the commencement address to the 2017 graduating class at her alma mater, Wellesley College. I watched a livestream and was inspired and encouraged by many of her statements, and a bit disgruntled when so much of the subsequent news coverage I saw highlighted only the bits that referred to President Trump. 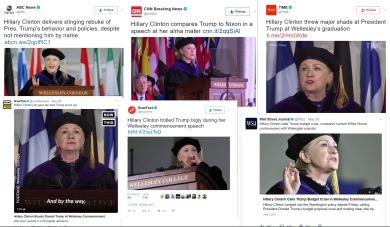 The giddy headlines exclaiming “trolled” and “major shade!” and the isolated clips of her references to impeachment or crowd sizes are a gross mischaracterization of the overall message of her speech. These headlines all focus on Trump, but the core of her message was confirming to the young women graduating that they are empowered to shape our country’s future. She gave advice and encouragement that can benefit all Americans. 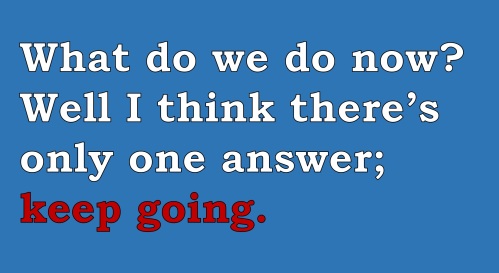 END_OF_DOCUMENT_TOKEN_TO_BE_REPLACED

The Best “Lord of the Rings” Quotes For Our Times

We’re still only a few weeks into the Trump Presidency, but it’s already been a very turbulent ride, and its not too soon to be able to tell that even darker times lie ahead. Here are the moments from The Lord of the Rings that I am comforting/inspiring/steeling myself with these days.

“When did Saruman the Wise abandon reason for madness?” This is what I say to the Congressional representatives who won’t stand up to Trump, even when he tweets complete nonsense. Or to any leaders who advocate for his malicious agenda. Their logic is exactly the same as Saruman’s–he is too powerful to resist! We must align with him to preserve our own positions of power! But as Gandalf later states, this is a fruitless effort. “There is only one Lord of the Rings, and he does not share power.” I’m not saying Trump is Sauron. But I think it is safe to say he is equally self-serving and that attempting to ride his coattails is indeed abandoning reason for madness. (P.S., I have another clip for the people in the White House communications office who keep making ridiculous defenses for the indefensible things their boss says.) END_OF_DOCUMENT_TOKEN_TO_BE_REPLACED

Nearly two years ago, President Obama gave a speech on the 50-year anniversary of the march on Selma, Alabama (dramatized in Ava Duvernay’s 2014 Oscar Best Picture-nominated “Selma”).  I remember thinking at the time that it was a fantastic speech, beautiful and inspiring. I even saved a copy of it in my “speeches” playlist; (there’s no way to make that not sound nerdy, but I don’t care. I’m a student of rhetoric and it’s a great speech.)

Over the past two weeks under our new President, as many citizens mobilized to resist the extremism coming from the White House, this line from the Selma speech kept echoing in my head: 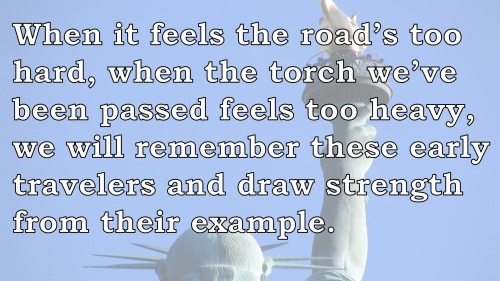 END_OF_DOCUMENT_TOKEN_TO_BE_REPLACED

Reckoning with the Legitimacy of Trump’s Election

Last Friday, the Office of the Director of National Intelligence released an unclassified version of the report on “Assessing Russian Activities and Intentions in Recent US Elections“. I recommend that you read it yourself, as I have just done. The pdf is 25 pages, but the body of the report itself is only 5 pages (not including the appendix), plus a 2-page introduction that should not be skipped that explains the context and how to understand the terminology and assessments presented in an intelligence briefing.  It includes “analytic assessment drafted and coordinated among The Central Intelligence Agency (CIA), The Federal Bureau of Investigation (FBI), and The National Security Agency (NSA)”, though this declassified version does not include all of the supporting evidence from the three agencies that are in the classified version. 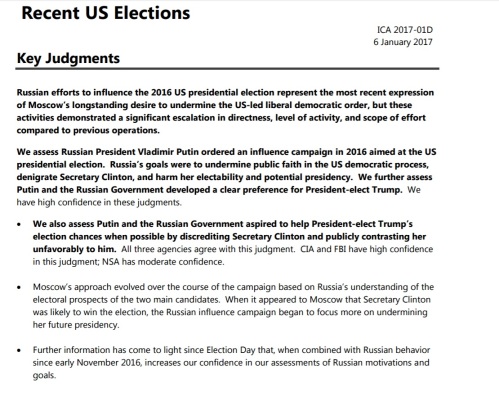 END_OF_DOCUMENT_TOKEN_TO_BE_REPLACED

Re-Reading Harry Potter and the Goblet of Fire, Post-Election

I re-read Harry Potter and the Goblet of Fire last month, and there were many things that stood out to me as very timely in the wake of the election. (Just to be clear, in case my readers are of differing opinions, I view the election of a man who consistently spews racist, sexist, hateful rhetoric, and who has shown a willingness to protect and preserve his own ego and assets but not our national security interests or constitutional integrity, as a very negative event that will harmfully impact much if not all of our citizenry, and which I am committed to mitigating and resisting in every way that I can.)

Oh, and also, this post contains spoilers for Harry Potter and the Goblet of Fire.

Google Image results that confirm I’m not the only one making certain comparisons. But maybe it’s more accurate to say Voldemort represents Facism, which has ‘returned’ in a new body despite lots of people having been under the impression it was defeated decades ago

END_OF_DOCUMENT_TOKEN_TO_BE_REPLACED

In the wake of the election, there’s been a lot of talk about the role that “the media”* or “fake news”** may have played in swaying voters.  This post is not going to talk about what responsibilities “the media” or individual journalists have, but the equally if not more important obligation that you and I have as consumers of news media: media literacy.

I’m pretty sick of hearing people blame “the media” for mass misinformation, or complain about “the biased media,” because the reality is: everything is ‘biased’!  Every news article, every media source, every movie, novel, or piece of art, every social media post you will ever read, has a bias. Much less important than asking “is this media source biased?” is identifying WHAT the bias is in any particular piece you encounter.  When you consume news media, no matter the source, you are not merely being fed a string of informative facts but also a chosen frame through which to interpret those facts. It is OUR responsibility to digest that frame as well as the facts; otherwise we are merely swallowing somebody else’s perspective whole. 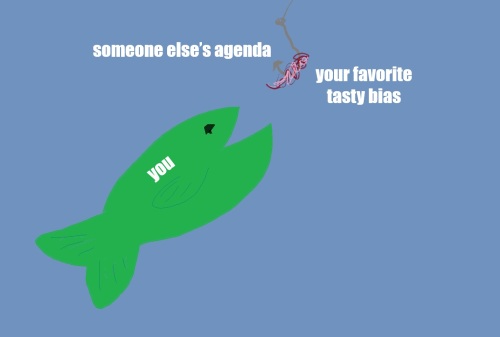 END_OF_DOCUMENT_TOKEN_TO_BE_REPLACED

I try to keep my identity vague  in most of my online accounts.  Most profiles that I have open to public viewing uses a pseudonym and only generic details:  Twenty-something.  Female.  Educated.  Employed.  It’s simply a matter of protecting my privacy and safety, and it allows me to feel comfortable interacting with people I don’t know and might have nothing in common with other than the same film and book obsessions.

But on Facebook, it’s the opposite.  I am only Facebook-friends with people that I have met and know in real life.  I love seeing pictures of my family and friends’ babies, I like being able to see what people that I haven’t talked to lately are up to, I enjoy “liking” the big announcements like engagements, weddings, graduations, new jobs,  or even new hairstyles.  But aside from being able to share pictures and news with family, I think the biggest benefit I draw from my Facebook feed is a continually-updated understanding of people and issues.

You often hear about the polarizing nature of the American public today.  Politics divide sharply down partisan lines, religion is treated as something that must either be fervently and legalistically clung to, or entirely rejected.  There is no room for a middle ground.  We like to talk about ourselves as an ever-progressive and tolerant society, but we venomously despise  the views that oppose our own.  We belittle those that we do not agree with and label them as everything “wrong with this country”, blaming the other side for “holding us back” or “calling judgment upon this nation.”  Above all, we use labels.  Those who don’t agree with us are not people, they’re not respectable fellow humans with convictions; they’re Homophobes, Liberals, Fundamentalists, Feminists, etc.

That’s where I think Facebook comes in handy.  I see posts on multiple sides of almost every issue or current news story in my feed.  I know some people block or un-friend people who post stances they don’t agree with or that annoy them, creating smaller and smaller circles of increasingly exclusive and homogeneous acquaintances.  Everyone is certainly free to control access to their own Facebook account as they see fit, but it’s often these Facebook friends who are the most extreme and outspoken that I value the most.  When I see a potentially polarizing post, I also have a context to put it in; I’ve seen the same person post about her bad day at work, or the movie he’s recently enjoyed.  I’ve seen the pictures of a family visit, and I know something about their education and career.  It forces me to see the poster as a complex individual, not a faceless label. 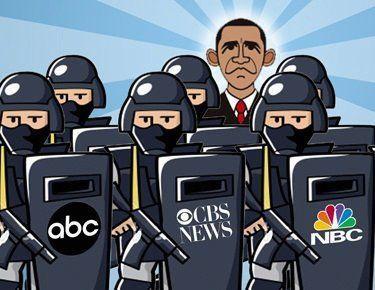 I was in a lot of classes and activities with the person who posted this, in high school. 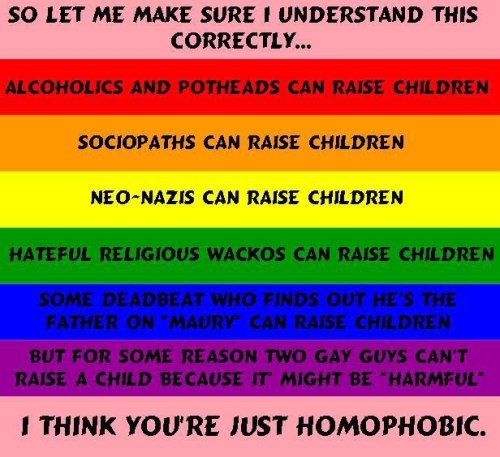 I know this poster from taking a few semesters of a college language class together, and we’ve hung out outside of class as well. 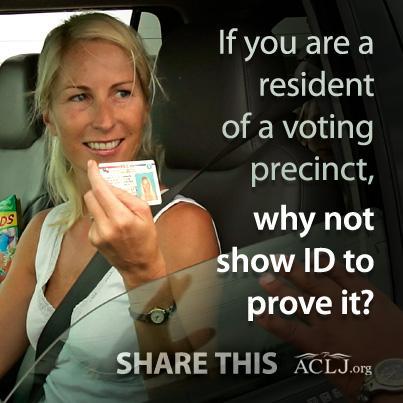 this poster helped me move. 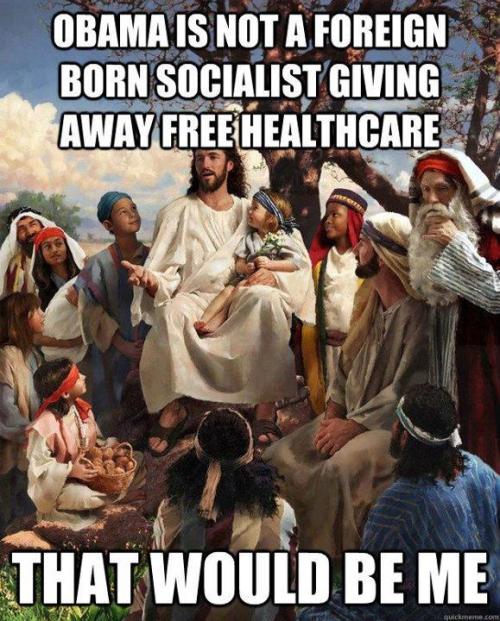 posted by several of my Facebook friends, including my cousin.

Forcing myself to see the person posting as complex and not a label is actually the very opposite of what many of those memes aim to do.  They often include partial facts or deliberately re-frame arguments to make them sound more compelling.  And the juxtaposition of ideas and perspectives propels me to continually try to see things from someone else’s point of view.  It’s what keeps me a moderate.  (It helps that at different points in my life I have lived in very conservative and very liberal communities; I’ve accumulated Facebook friends with a wide range of backgrounds, lifestyles, and opinions.)

These images both appeared in my feed in the same week.

It’s not the same thing as interacting with a diverse mix of people in real life, since people may be more conscious of the persona they cultivate online, and it may not reflect everything about the real person.  I have to confess that I am a bit stealthy myself on Facebook, rarely posting the types of political or religious commentaries that I scrutinize so carefully on others’ walls.  Perhaps I am too much of a silent coward, perhaps I should speak up more.

And I’m not saying that every post is ultimately valid–sometimes people’s views really are just spewing unfiltered hatred, ignorance, or misinformation, but if I conclude that about a post on Facebook, at least I can hope that my rejection of the post isn’t a knee-jerk reaction in my own disagreement to the stated opinion.  There are only a few people that I’ve observed display a consistent pattern of cold-heartedness; most people, on every side of every issue, are compassionate and concerned for people who are hurting, or at risk, or disadvantaged, unlike they are often portrayed by their opposition.  They just have different convictions on what the solution should be.

Constantly trying to contextualize Facebook posts is more than just putting a face on a particular position, it’s dismantling the idea that you could ever even have one person that represents an entire segment of society.  I wish more people could learn to take the time to discern the realities behind the rhetoric, to realize that saying you understand someone’s position doesn’t have to mean that you agree with it, to adopt a way of declaring their convictions without denigrating everyone else’s.  Think about it–the path to a more compassionate and civil society could lie through a cultivating a diverse Facebook feed.